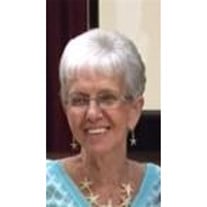 Barbara "Bobbi" Seddon, 85 of Graceville, FL went home to be with the Lord, Thursday, February 15, 2018.Ms. Bobbi loved the Lord with all her heart. She and Mr. George were passionate about missions and were able to travel and share the Gospel... View Obituary & Service Information

The family of Barbara "Bobbi" Seddon created this Life Tributes page to make it easy to share your memories.

Barbara &quot;Bobbi&quot; Seddon, 85 of Graceville, FL went home to be...