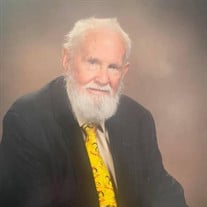 Bob D. Phillips was called to his heavenly home on Sunday, December 6, 2020 at 12:46 am. Visitation with the family will be on Monday, December 7 at 7 pm at James and Lipford Funeral Home. A graveside service will be 2 p.m., Tuesday, December 8, at Bethel Baptist cemetery, with Rev. Chester Padgett officiating, James & Lipford Funeral Home in Graceville directing. In lieu of flowers family request memorials be made to Covenant Care, 4215 Kelson Avenue, Suite E Marianna, FL 32446. Mr. Bob was born on March 3, 1930, in Burkburnett, Texas, the son of Edwin Lafayette Phillips and Addie Mae Cantrell. He lived most of his life in Denison, Texas, graduating from Denison High School in 1948. At the age of 20, he fell in love and married Thelma Dalton on January 17, 1950 in Denison, Texas. The two were married for more than 66 years until Thelma passed away in May of 2016. Mr. Bob was devoted to caring for his wife in their home as she suffered from Alzheimer’s the final years of her life. Mr. Bob worked for the Missouri, Kansas Texas railroad for more than 30 years starting off as a lineman and eventually as the head of the communication and signals department. While living in Texas he was an active member and deacon at Calvary Baptist Church and later at Hyde Park Baptist Church. He and his wife moved to Florida in the early 1990s and where they continued to be active in their church and volunteered for mission trips to other states as they worked with a disaster relief team preparing meals in Biloxi Mississippi for a week after a hurricane devastated the city. Mr. Bob, along with his wife also worked for several years promoting and collecting Christmas shoe boxes for Samaritan's Purse. He is survived by his two daughters, Elaine Ann Cone (husband Dave) and Angelina Caroline Bell (husband Bryan) from Graceville, 3 grandchildren: Michael (wife Patty) of Pennsylvania, Amy Cone (husband Ryan Dean) of Panama City, and Lexi Bell of Graceville, 2 step grandchildren: Ryan (wife Kayla), and Jake Bell of Graceville, 2 great grandchildren, Bennett Cone of Pennsylvania and Isabelle Dean of Panama City, 4 step great grandchildren: Lacey, Lailee, Kaysten, and Kaynon Bell of Graceville, and a host of beloved nephews and nieces in Texas, Oklahoma, Colorado and New Mexico. He was preceded in death by his wife of 66 years, Thelma Mae Phillips, his mother, Addie Reel and three older brothers, Thomas Phillips (wife Katharine), Edwin, and James Phillips (wife Dorothy). The family wishes to express their sincere gratitude to Covenant Care for their compassion and dedicated care given to Mr. Bob in his final days.

Bob D. Phillips was called to his heavenly home on Sunday, December 6, 2020 at 12:46 am. Visitation with the family will be on Monday, December 7 at 7 pm at James and Lipford Funeral Home. A graveside service will be 2 p.m., Tuesday, December... View Obituary & Service Information

The family of Bob Phillips created this Life Tributes page to make it easy to share your memories.

Bob D. Phillips was called to his heavenly home on Sunday, December...