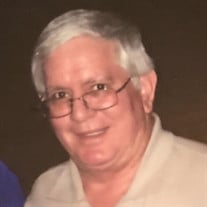 On Tuesday, December 15, 2020, Charles Jesse Collins, loving father and husband, went home to be with the Lord. Charles was born in 1951 in Hobbs, New Mexico. His family moved to Santa Rosa County, Florida where he graduated from Milton High School in 1969. He met his wife, Pat Jones in Pace, Florida and was married on February 23, 1973. He served 8 years in the United States Air Force being honorably discharged in 1984. In 1983 he surrendered to God’s call for service in pastoral ministry. He received a Bachelor’s Degree in Christian Education and a Bachelor’s Degree in Theology in 1986 from the Baptist College of Florida, and a Master’s Degree in Psychology and Counseling from Troy State University in 1994. He was ordained at Florosa Baptist Church, Mary Esther, Florida in February 1989. While working bi-vocationally and raising his family in Graceville, Charles served the Lord in many Churches in the tri-states area and was a member of the Southern Baptist Bi-Vocational Ministers Association. In the local community, Charles was active in the Lion’s Club, serving as past President, Vice-President and Secretary and the American Legion, serving as past Adjutant, Commander and Chaplain. He was employed as the Registrar and later as the Director of Academic Services at the Baptist College of Florida, as well as served as an Adjunct Professor from 1989 to 2001. Charles was preceded in death by his father, Albert L. Collins. He is survived by his wife of 47 years, Pat; daughters Abbey Collins, Becky Dickson, Jessi Collins and Katie Ward; two grandsons Krisztian Fodor and Kal-El Dickson; one granddaughter, Anika Dickson; two brothers John and David Collins; sister Kathy Bell; half-brothers Marcus and Travis Collins; step-mom, Sara Collins; several nieces, and nephews. Memorial service will be held 11:30 a.m., Thursday, March 11, 2021 at Barrancas National Cemetery in Pensacola, FL.

On Tuesday, December 15, 2020, Charles Jesse Collins, loving father and husband, went home to be with the Lord. Charles was born in 1951 in Hobbs, New Mexico. His family moved to Santa Rosa County, Florida where he graduated from Milton High... View Obituary & Service Information

The family of Charles Collins created this Life Tributes page to make it easy to share your memories.