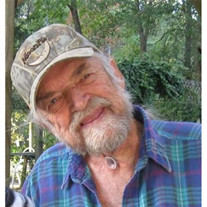 David Ewell Bass, 83 of Graceville, Poplar Springs Community, passed away Friday,September 21, 2018 at Northwest Florida Community Hospital. David was born on March 27, 1935 in Holmes County to the late William Edrie "Buster" Bass and Ruth Estelle Kelley. A 1953 graduate of Poplar Springs High School, David was drafted into the U.S. Army. He then worked with Gold Kist Peanut and Registers Dairy. He started working in construction with Slingluff, West Florida Enterprises and Horton's Construction for a number of years. David eventually went out on his own along with his boy's and was known for his detail in painting and carpentry. A Dad and "Pawpaw" such as David, leaves his mark in the world through the love he gives his children and grandchildren. David will be missed not only by them, but by everyone who knew him. A Home-going service will be 10 a.m., Tuesday, September 25, 2018 at the Chapel of James & Lipford Funeral Home with Bro. Raymond O'Quinn officiating. Burial will follow in Brown-Bush-Tindel Cemetery with James & Lipford Funeral Home in Graceville directing. Family will receive friends at the funeral home on Monday, 6 p.m. until 8 p.m. Preceded in death by his parents, one son Edrie and one brother Tommy Bass. He is survived by his beloved wife Frances Bass, Todd Bass(Tara), Graceville, David Bass(Jennifer), Noma, Mechele Bass(Greg Bush), Graceville, Shannon Bass Kukla(LTC Matthew Kukla) Huntsville, AL, Michael Bass(Jamie), Graceville; seventeen grandchildren and five great grandchildren.

The family of David Bass created this Life Tributes page to make it easy to share your memories.