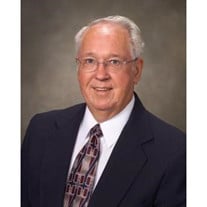 Dr. Walter Wiley Richards was born June 25, 1932 in the Pleasant Grove community of Pensacola, Florida to Walter Judson and Charlie Jones Richards. He was born spiritually when he was twelve years of age when he accepted Jesus as his Lord and Savior. On April 15, 2017 he went to hear, "Well done, thou good and faithful servant." After graduation from Pensacola High School, Wiley served in the U.S. Navy during the Korean War. While he was in the Navy, two important events changed his life. First, he felt and answered God's call to preach. Second, he married his high school sweetheart, Betty May Hargrave. They have served God together for over 64 years. Wiley attended Pensacola Junior College, then received his degree from Howard College, now Samford University. He attended New Orleans Baptist Theological Seminary where he earned the MDiv and ThD in Historical and Systematic Theology. He later attended FSU and received the MA and PhD in Philosophy. He has served as pastor of churches in Florida, Alabama, Mississippi, and Louisiana. He served as interim pastor 51 times, and preached many revivals, Bible studies and Evangelism clinics. His greatest joy was leading people to faith in Christ, which he did scores of times. In 1968, he moved with his family to Graceville, FL where he taught at The Baptist College of Florida (formerly Baptist Bible Institute) for 34 years. Upon his retirement he was awarded the title of Professor Emeritus of Theology and Philosophy. While teaching there he published 5 books, wrote weekly Sunday School lessons for the Florida Baptist Witness for 27 years, and wrote numerous other articles and papers. His hobbies included hunting, fishing, singing gospel songs, playing the violin and guitar, rebuilding cars, oil painting, taxidermy, and carving. Dr. Richards home-going service will be held 2:00 p.m, Tuesday, April 18, 2017, in the R. G. Lee Chapel at The Baptist College of Florida with Dr. Thomas A. Kinchen, Dr. R. C. Hammack, Dr. Ken Harrison and Dr. Roger Richards officiating. Burial will follow in the Marvin Chapel Cemetery, with U. S. Navy Honors, James & Lipford Funeral Home in Graceville directing. Family will receive friends in the R. G. Lee Chapel at The Baptist College of Florida, Monday, April 17, 2017, 6:00 p.m. until 7:30 p.m. In lieu of flowers, the family request memorials be made to the Richards' Scholarship Fund at The Baptist College of Florida, 5400 College Drive, Graceville, FL 32440. He was preceded in death by his parents, three sisters, and one granddaughter, Karen Marie Richards. He is survived by his wife, Betty, Graceville, FL; two sons, Walter Glen Richards (Carol), Middlesboro, KY and Roger Charles Richards (Sandra), Graceville, FL; two daughters, Regina Karen Rozsa (Andrew), Birmingham, AL and Charlene Joan Wiggins (Stuart), Marianna, FL; 9 grandchildren, 15 great-grandchildren; one sister, Eulanee Pierce, Gautier, MS; and his Vietnamese family, Richard Hoang (Jeanette), children and grandchildren. His grandsons will serve as pallbearers.

Dr. Walter Wiley Richards was born June 25, 1932 in the Pleasant Grove community of Pensacola, Florida to Walter Judson and Charlie Jones Richards. He was born spiritually when he was twelve years of age when he accepted Jesus as his Lord and... View Obituary & Service Information

The family of Dr. W. Wiley Richards created this Life Tributes page to make it easy to share your memories.