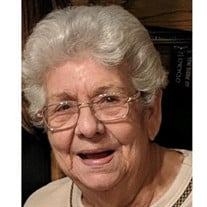 Etta Jean Slesser, 83, of Cottondale, Florida died in her home surrounded by family on Sunday, October 18, 2020. Jean, as she liked to be called, was born in Pennsylvania and grew up there with her brother, Christopher Flynn, Jr. and her sister, Penny Flynn Pratt. She is preceded in death by her son, Harold Cole, Jr., her mother, Etta Nusser Flynn and her father, Christopher Flynn, Sr., also of Pennsylvania. Jean was the oldest of the three children. She married Kenneth Slesser February 3, 1973. Etta had 3 children, Christine, Harold “Cap”, and Lucinda “Lucy” and together they had Michael. Ken also added two children to the family, Roy and Suzanne Slesser. In 1979 Ken and Jean set out for Florida to make a new life bringing their youngest two children at home with them, Lucy and Mike. They started their adventure in Graceville, Florida where Ken attended the Baptist College and Jean also attended college for a time. After a few years they moved their residence to Cottondale, Florida and have remained there ever since. Ken and Jean had always been interested in buying and selling antiques and other anomalies. Upon moving to Florida, they also opened a wicker business and continued to run it until they decided to retire. They were members of Cottondale First Baptist Church where Jean taught the 2-4 year olds Sunday School for many years. She also taught Sunday School when they lived in Pennsylvania. One thing Jean really enjoyed were her dogs and Conway Twitty. Ken took her to see 3 live concerts during their time together and she thoroughly enjoyed every minute and every song. She and Ken have 6 children together (including 1 deceased), 16 grandchildren (also including 1 deceased), 24 great-grandchildren, and numerous nieces and nephews. A memorial will be held at Valley Baptist Church in Middletown, Pennsylvania followed by graveside with family with the date to be determined. Those in attendance are asked to wear a mask and practice social distancing. Anyone wishing who would like to send a memorial in her memory to Emerald Coast Hospice 1330 S. Blvd Chipley, FL 32428.

Etta Jean Slesser, 83, of Cottondale, Florida died in her home surrounded by family on Sunday, October 18, 2020. Jean, as she liked to be called, was born in Pennsylvania and grew up there with her brother, Christopher Flynn, Jr. and her sister,... View Obituary & Service Information

The family of Etta Jean Slesser created this Life Tributes page to make it easy to share your memories.

Etta Jean Slesser, 83, of Cottondale, Florida died in her home...