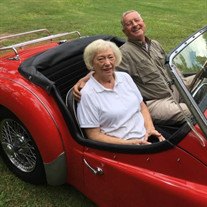 Dr. George H. Kinchen, Jr. (Harry) went home to be with our Lord on Sunday, November 22, 2020, at Vanderbilt University Hospital in Nashville after a battle with cancer. A native of Thomasville, Georgia, Dr. Kinchen and his wife, Martrelle were living in Crossville, Tennessee at the time of his death. He was preceded in death by his father, George H. Kinchen, Sr., his mother, Annie Lou Kinchen, and his sister, Dr. Norma Jean Leatherman. Dr. Kinchen is survived by his wife Martrelle, a son, George H. Kinchen III and his wife Hilka, and a grandson, George H. Kinchen IV and his wife Valerie. He is also survived by his brother, Dr. Tom Kinchen and his wife Ruth Ann as well as several nieces and nephews. Born in Thomasville, Georgia on January 17, 1942, Dr. Kinchen was 78 at the time of his death. He had a long career of service to his Lord, his family, and his country. Shortly after graduation from high school, he joined the U.S. Army where he served in Vietnam. He later served with the National Security Agency. After his military service, Dr. Kinchen served as a police officer with the Washington D.C. Police Department and a Revenue Agent with the Georgia Department of Revenue. He later served as a hospital administrator. During this time, he earned a degree from the University of Georgia. After responding to God’s call to Christian ministry, Dr. Kinchen earned a Masters and Doctorate degree. For the last forty-seven years of his life, Dr. Kinchen served as pastor of churches in Florida, Georgia, West Virginia, and New York. He served as a missionary under appointment of the Southern Baptist International Mission Board in Botswana (southern Africa) and under appointment of the Southern Baptist North American Mission Board in West Virginia. In addition to serving as pastor in West Virginia, Dr. Kinchen served as State Director of Missions and as Interim Executive Director of the West Virginia Convention of Southern Baptists. A Home-going graveside service will be 11 a.m., Friday, November 27, 2020 at Damascus Baptist Church Cemetery with Dr. Tom Kinchen, Dr. Alex Kinchen and Rev. Chester Padgett officiating. Military Honors will be provided by Ft. Rucker, James & Lipford Funeral Home in Graceville directing. Family request remembrances be made to the Baptist College of Florida 5400 College Drive Graceville, FL 32440.

Dr. George H. Kinchen, Jr. (Harry) went home to be with our Lord on Sunday, November 22, 2020, at Vanderbilt University Hospital in Nashville after a battle with cancer. A native of Thomasville, Georgia, Dr. Kinchen and his wife, Martrelle... View Obituary & Service Information

The family of George "Harry" H. Kinchen Jr. created this Life Tributes page to make it easy to share your memories.