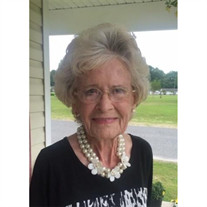 Grace Ashley Glaze went to be with the Lord on December 4, 2018 at the age of 94. Mrs. Glaze was born on January 8, 1924 in DeKalb County, Alabama, to Charles Ashley and Kattie Mitchell Ashley. Mrs. Glaze was married to her loving husband, Dr. Redus Edgar Glaze, for almost 72 year before his death in 2012. Mrs. Glaze was an educator, having taught elementary school for 28 years in New Orleans, Louisiana, where her husband was Professor of New Testament and Greek at the New Orleans Baptist Theological Seminary for 32 years. She was a gifted Sunday School teacher from her teen years until her late 80ties. After the Glazes retired, they moved from New Orleans, Louisiana, to Cullman, Alabama. There they were active members at First Baptist Church, Cullman. The Glazes served at Lake Catoma Baptist Church, where he was pastor. She assisted her husband in teaching seminary extension classes for New Orleans Baptist Theological Seminary. In 2015 she moved to Graceville, Florida, to a cottage on the campus of The Baptist College of Florida, where she was a member of First Baptist Church of Graceville. Affectionately known as Miss Grace, she was always showing love and care for the members of her family, church and community. Mrs. Glaze was gifted in sewing, creating and teaching ceramics, crocheting, cooking and decorating. Mrs. Glaze is preceded in death by her brother and sister-in-law, Ward and Ruby Ashley; brothers-in-law and sisters-in-law: J. D. and Ruby Glaze Glasscock; Herman and Nancy Glaze Dunkin; brother-in law James Ray Glaze. She is survived by her four children: Linda Glaze Vaughn (Judson) of Graceville, Florida; Judith Glaze Pruitt (William) of Pell City, Alabama; Joseph Edgar Glaze (Jenny) of Newtown, Connecticut; and Betty Glaze Dyess (Steven) of Rochester, Minnesota; sisters-in-law: Louise Glaze McDowell (Robert) of Muscle Shoals, Alabama; Patty Glaze of Montgomery, Alabama; 13 Grandchildren, 28 Great-grandchildren, 4 Great-great-grandchildren, and numerous nieces and nephews. James and Lipford Funeral Home, Graceville, Florida, is in charge of the arrangements. The service will be held on December 10 at the Hopewell Baptist Church, 600 Hopewell Dr. N. E. Hanceville, Alabama; visitation at 1:00p.m., service at 2:00p.m. The burial will be at the Hopewell Cemetery next to the church. Memorial gifts may be given to The Baptist College of Florida, Graceville, Florida.

Grace Ashley Glaze went to be with the Lord on December 4, 2018 at the age of 94. Mrs. Glaze was born on January 8, 1924 in DeKalb County, Alabama, to Charles Ashley and Kattie Mitchell Ashley. Mrs. Glaze was married to her loving husband, Dr.... View Obituary & Service Information

The family of Grace Glaze created this Life Tributes page to make it easy to share your memories.