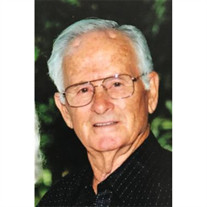 J V Shiver, 92, of Panama City, Fl, formally of Graceville, Fl, passed away December 27, 2017 at home in his family's arms. He was born on December 30, 1924 in Graceville, Fl to Gaston and Janie Shiver where he grew up on a farm with his three siblings. He met Lillian Miller in Panama City at Church in 1943. They were married a short time later and he often referred to her as the "Prettiest girl in church!". J V joined the navy and served his country as a crew member on the U.S.S. Intrepid during WWII. At the end of the war he returned to Graceville where he and Lillian farmed for a short time before moving to Panama City where he went to work for the Navy Mine Defense Lab Civil Service until his retirement in 1972. J V and Lillian were parents to Jimmy, Patsy, and Terry. J V was a loving father, wonderful role model, and a man of many talents. He enjoyed building his family homes and building projects for the many friends and work mates he met at the navy base over the years. He even built homes for each of his siblings, for which he was very proud. He also built apartments and had rental properties that he maintained after retiring from civil service. He enjoyed camping and fishing at Wewahitchka with family and friends at his camp and later, camping with friends in their motor homes in their camping club. He was a member of the Square Eights Square Dance Club, Elks, and Moose Club. J V was an outstanding husband, father, grandfather, and great grandfather. He is survived by his wife of nearly 75 years, Lillian; daughter, Patsy Ansley; grandson, Frank Ansley and great granddaughter, Lilly; a brother Gaston Shiver, Jr. He was preceded in death by his parents, Gaston Sr. and Janie Shiver; brother, Ferrell; sister, Helen Morris, and sons, Jimmy and Terry Shiver. Funeral services will be at New Home Baptist Church on Tuesday, January 2, 2018 at 11 A.M. with Reverends Johnny Jones & Bryan Taylor officiating. Interment will follow in the church cemetery with James & Lipford Funeral Home of Graceville directing. The family will receive friends from 10:30 A.M. until service time at the church. Those serving as pallbearers will be James Shiver, Shay Shiver, Mike Bush, Doug Parker, Scott Birdge, and Terrell Culbert. The family would like to thank Covenant Care. They would also like to extend a very special thank you to the Bay County Council on Aging and the special people there that were so loving to J.V., allowing him to stay home during his illness. In lieu of flowers, memorial contributions may be made in J.V.'s name to the Bay County Council on Aging, 1116 Frankford Avenue, Panama City, Fl 32401.

J V Shiver, 92, of Panama City, Fl, formally of Graceville, Fl, passed away December 27, 2017 at home in his family's arms. He was born on December 30, 1924 in Graceville, Fl to Gaston and Janie Shiver where he grew up on a farm with his three... View Obituary & Service Information

The family of J.V. Shiver created this Life Tributes page to make it easy to share your memories.