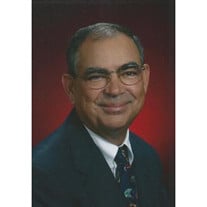 Jerry Lee Cordell of Graceville, Florida went home to be with his Lord following an extended illness on Saturday, September 20, at 3:30 a.m. He died peacefully, in his sleep, at his home surrounded by family and friends. He was 72 years old. The family will receive friends on Monday, September 22, 5-7:00 p.m. at First Baptist Church of Graceville, FL. Funeral services will be held on Tuesday, September 23, at 1:00 p.m. at First Baptist Church of Graceville, FL. His son, Lee Cordell, will be officiating, with his son-in-law, Scott Carow, doing the eulogy. Burial will follow at Pine Level Baptist Church, in Louisville, AL, where he and his wife began their life long journey together. James & Lipford Funeral Home will direct the funeral. In lieu of flowers, the family requests that donations be made to the Alzheimer's Resource Center (P.O. Box 1170, Dothan, AL 36302), Covenant Hospice (4440 Lafayette St., Suite C, Marianna, FL 32446), or Compassionate Hope Foundation (111 Gloryland Lane, Antioch, TN 37013). Mr. Cordell was born on December 31, 1941, the son of Noah and Nannie Cordell of Texasville, AL. He graduated from Baker Hill High School and attended Troy University, Wallace College, and Auburn University where he received his BSBA degree in accounting on March 16, 1972. He served in the U.S. Army from 1962-1964 prior to his marriage in 1966. He worked in the textile industry prior to enrolling in college, and he worked as a part-time accounting clerk at West Point Pepperell, Inc., Opelika AL until he graduated from Auburn University. He was then hired as a full-time accountant. He spent his career as an accountant at the University of West Florida in Pensacola, The University of Tennessee at Chattanooga, TN and he retired from The Baptist College of Florida, Graceville, FL after 21 years as Vice President for Financial Affairs in 2003. He enjoyed hunting, fishing, golfing, Auburn football, and Atlanta Braves baseball, as well as woodworking and spending time with family and friends. He was a deacon at First Baptist Church in Graceville where he taught a couples' Sunday School class and served on the Finance Committee, Personnel Committee, and as Chairman of Deacons. At the time of his death, he was a member of Mount Gilead Baptist Church in Dothan, Alabama. He was preceded in death by his parents Noah and Nannie (Seay) Cordell, and is survived by his wife of 47 years, Reta Spivey Cordell, Graceville, FL; a son, Lee Cordell (Jacqueline), Omaha, NE; a daughter, Gina (Scott) Carow Ft. Bliss, El Paso, TX; and a sister, Glenda (Ledon) Denham, Newnan, GA. He had 7 grandchildren whom he loved dearly: Jackson, Andrew, and Leighton Cordell as well as Lexi, Emily, Grant, and Sawyer Carow. Other special brothers-in-law and sisters-in-law are Lawson and Linda Spivey, Ozark, AL; Leslie and Alice Spivey, Glenwood, AL; Donny and Nancy Spivey, Louisville, AL; Johnny and Rhonda Willis, Dothan, AL; Tommy and Jean Self, Clayton, AL; Katherine Price, Headland, AL; and Martin and Dianne Spivey, Lafayette, AL. The family would like to thank Covenant Hospice workers Ben Beall, Bob Johnson, Jimmy King, Lisa Barnes, Cyndi Peacock. Peggy Ann Chapman, Lynn Jordan, and Toni Qualls for their faithful, loving service and incredible care over the past several months.

Jerry Lee Cordell of Graceville, Florida went home to be with his Lord following an extended illness on Saturday, September 20, at 3:30 a.m. He died peacefully, in his sleep, at his home surrounded by family and friends. He was 72 years old.... View Obituary & Service Information

The family of Jerry Cordell created this Life Tributes page to make it easy to share your memories.

Jerry Lee Cordell of Graceville, Florida went home to be with...