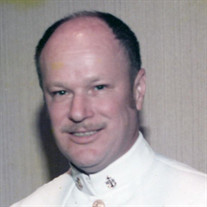 Cattle rancher and retired Navy Chief James Wesley Stephens’ love of life didn’t come to an end with his death. Jim passed away in his sleep on August 9, 2021, at the age of 70 while trying to return to normalcy after triple by-pass and micro value replacement surgery. His family and friends vow to practice his kind and giving nature to continue his legacy. Jim joined the Navy during the Vietnam War and sailed the seven seas during his 22 plus year career in the Navy before going to the fleet reserve in 1995. He was later medically retired and classified as 100% disabled by the Department of Veterans Affairs yet continued to run a small cattle ranch in Holmes County, Florida. During his Naval career, Jim sailed on the USS Corry, USS Nimitz on which he is plank owner, USS Virginia on which he is a plank owner and USS Caron; was stationed at Rapid Deployment Joint Task Force at MacDill AFB, Florida and to the Commander Amphibious Squadron Eight at Norfolk Naval Air Station, Virginia. Besides his love of the sea and cattle ranching, Jim loved his Pittsburgh Steelers, horses and horseback riding, motorcycles, German Shepherds, cats, restoring antique cars, driving his Corvette, and was often noted helping others in his community with selfless acts of kindness. He sported a snowy white beard and hair and was once stopped by a small child who asked if he was Santa Claus. He knelt and told the child no but assured him that if he told him what he wanted, he would let him know. Jim also found time to follow in his fathers’ footsteps by becoming a Mason and a Shriner by Scottish Rite and the Shaddai Temple. He is member in good standing at the Bethlehem Lodge. Jim entered this world on October 18, 1950, in Pittsburgh, Pennsylvania as the 2nd son and 2nd child of 7 to Wesley Payton Stephens and Martha Margret Mary Martonik. He is preceded in death by his parents, a brother, Daniel Terrence Stephens and a sister, Jeanne Ellen Coley. He is survived by his loving wife of 39 years, Bette Lipsy-Stephens; sisters, Margret Ann Stephens and Susan Jeanne Nelson; brothers, Wesley Payton Stephens, Jr. and Richard Martin Stephens; and many cousins nieces and nephews. Graveside funeral services will be 12 Noon CDT Wednesday, August 18, 2021 at Tallahassee National Cemetery with James & Lipford Funeral Home of Graceville directing. The family will receive friends from 5-7pm CDT Tuesday, August 17, 2021 at James & Lipford Funeral Home.

Cattle rancher and retired Navy Chief James Wesley Stephens&#8217; love of life didn&#8217;t come to an end with his death. Jim passed away in his sleep on August 9, 2021, at the age of 70 while trying to return to normalcy after triple by-pass... View Obituary & Service Information

The family of Jim Stephens created this Life Tributes page to make it easy to share your memories.