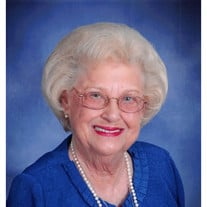 Kathleen Barker Turner, a resident of Graceville, Florida, went to be with the Lord on December 15, 2019. She was 87 years old. She was born in Graceville, July 17, 1932 to Lorene Pelham and John Daniel "Daddy Buck" Barker. Kathleen graduated from Dothan High School in 1950 and attended Auburn University, where she met her husband, John Turner. She was a loving wife for 48 years until his death. She retired from the City of Graceville, after serving for 37 years as the town's City Clerk. Kathleen took great pride in her career as City Clerk and served as a mentor to many city managers and other employees. She was named Lion's Club Woman of the Year in 2000. Kathleen was a faithful and active member of First United Methodist in Graceville for 60 years, where she served in many capacities. Her home was always open and served as a gathering place to her many family, friends, former co-workers and acquaintances who would often drop by for a visit and a cup of coffee. In addition to her parents, Kathleen was preceded in death by her husband John Hanby Turner, son-in-law David Raymond Wright and sister Abbie Jean Burdeshaw. Kathleen was most proud of her family and loved them deeply. She is survived by her children Paula Jean Turner Wright of Graceville and John Barker (Terri) Turner, Dothan, Al. Her grandchildren James David Wright, Destin; Jordan Turner (Jason) Sinyard, Perry, Ga; Anna Kathleen Turner, Montgomery, Al. Her great grandchildren Jax Barker Sinyard and Scarlett Leigh Sinyard. Her niece Sarah Katheen (Robert) Jewell; nephews Pat (Julie) Burdeshaw and Dan (Lesa) Burdeshaw. Funeral service will be held Wednesday, December 18, 2019 at 11:00 am at First United Methodist Church in Graceville with Reverends Mike Pearson and Dan Rhodes officiating. Burial will follow in Marvin Chapel Cemetery with James & Lipford Funeral Home in Graceville directing. A visitation will be held at First United Methodist Church Tuesday, December 17 from 5:00-8:00 pm. In lieu of flowers, memorials may be made to First United Methodist Church PO Box 376 Graceville, FL 32440.

Kathleen Barker Turner, a resident of Graceville, Florida, went to be with the Lord on December 15, 2019. She was 87 years old. She was born in Graceville, July 17, 1932 to Lorene Pelham and John Daniel "Daddy Buck" Barker. Kathleen graduated... View Obituary & Service Information

The family of Kathleen Turner created this Life Tributes page to make it easy to share your memories.