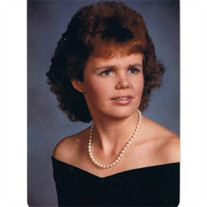 Lori Ann Sloan-Tomlin-Monfort (4/2/1970-10/11/2015) Lori was born at Flowers Hospital, Dothan Rucker, Alabama, April 2, 1970, the only daughter of Frank E. Sloan and Glenda Brannon Sloan. She was the middle of three children with an older brother, Gregory T. Sloan and a younger brother, Anthony Kevin Sloan. The first few years of Lori's life were in Graceville, Florida, and, subsequently, at various places following her father's posting during a Naval career including: Roanoke, VA, Key West, FL, San Diego, CA and Pensacola, FL. Lori returned to Graceville and attended Graceville High School where she played on the Lady Tigers basketball team and graduated with the class of 1988. Lori married Michael J. Tomlin, April 20, 1990 in Graceville. FL. Unfortunately the marriage did not last and Michael and Lori divorced in 1997. Michael and Lori had two children together: Courtney Ann Tomlin (1990) and Christopher Michael Tomlin (1992). Lori later married Daniel B. Monfort in Dothan, AL and they had two children together: Jeffery W. Monfort (2000) and Edward B. Monfort (2004). Lori Ann passed away on 11 October 2015, after an extended illness. In lieu of a traditional funeral service, Lori will be cremated and a memorial service will be held at the Graceville First Assembly of God Church on Saturday, 17 October 2015 beginning at 11:00 AM with music and messages from Reverend John C. Broome and Reverend Brett Snell. A family and friends gathering with refreshments will follow immediately. Instead of flowers, the family prefers a donation in her name to: Covenant Hospice Panama City Team 107 West 19th Street Panama City, Florida 32405 (850) 785-3040 Expressions of sympathy can be made at www.jamesandlipford.com

Lori Ann Sloan-Tomlin-Monfort (4/2/1970-10/11/2015) Lori was born at Flowers Hospital, Dothan Rucker, Alabama, April 2, 1970, the only daughter of Frank E. Sloan and Glenda Brannon Sloan. She was the middle of three children with an older brother,... View Obituary & Service Information

The family of Lori Monfort created this Life Tributes page to make it easy to share your memories.