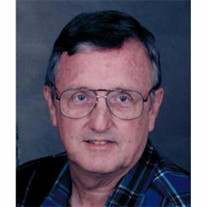 Chief Petty Officer Raymond (Ray) Gary Brandt of Campbellton, FL passed away peacefully at the Big Bend Hospice House on March 17, 2016 in Tallahassee, FL at the age of 80. Ray was born on October 26, 1935 in Wenatchee, WA to Chris Brandt and Hazel (Hough) Brandt. He enlisted in the United States Navy in 1952 and was assigned to Great Lakes Naval Training Center, Naval bases in Norfolk, VA, Mayport, FL, and Long Beach, CA. During his early years in the Navy, he met his wife Gail and they were married in 1960. He retired after 20 years of proudly serving his country. After retiring from the military in 1972, he and his family moved to Campbellton, FL. He then worked for Sunnyland Meat Packing Plant and later worked and retired from Michelin Tire Corporation plant located in Midland City, AL. Ray enjoyed woodworking and often made various items for family and friends. After retirement, both he and his wife spent many years in their motor home traveling and meeting new friends. Ray was a member of the First United Methodist Church of Campbellton, FL. Ray is survived by his wife, Gail (Reeves) Brandt of Campbellton, FL; children, Dennis Brandt (Edie) of Crawfordville, FL and Cathy Brandt of St. Petersburg, FL; siblings, Ed Brandt and Roger Brandt both of Wenatchee, WA; his grandchildren, Gary Brandt, Christina Munoz, Mary Lee Blume, Jeana Lynn Brandt and Jeremy Brandt; and 7 great-grandchildren. He is preceded in death by his father Hans Christian (Chris) Brandt of Seattle, WA and his mother Hazel Dunnagan of Wenatchee, WA. A Memorial Service is Saturday, April 2nd at 10 a.m. at the Chapel of James and Lipford Funeral Home in Graceville, FL. The family will receive friends at the funeral home immediately following the service. The family will also receive friends on Friday night from 5 p.m. - 7:30 p.m. at the family home in Campbellton. Rev. Addis Habbard will officiate the ceremony. All are welcome to attend and celebrate Ray's life.

Chief Petty Officer Raymond (Ray) Gary Brandt of Campbellton, FL passed away peacefully at the Big Bend Hospice House on March 17, 2016 in Tallahassee, FL at the age of 80. Ray was born on October 26, 1935 in Wenatchee, WA to Chris Brandt and... View Obituary & Service Information

The family of Raymond "Ray" Brandt created this Life Tributes page to make it easy to share your memories.