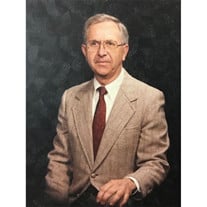 Mr. Robert Lee (Bob) Price, Jr. passed away on Tuesday, February 6, 2018 at Wesley Place in Dothan, Alabama. A celebration of his life will be held at 11 am CST on Friday, February 9, 2018, at the First United Methodist Church of Graceville, Florida. Family will receive friends from 6-8 pm on Thursday, February 8, 2018 at the First United Methodist Church fellowship hall in Graceville. Memorial contributions may be made to the First United Methodist Church of Graceville at www.jamesandlipford.com. Mr. Price was born in Graceville on August 5, 1932 to Robert Lee Price, and Janie Mixon Price of Graceville. He graduated from Graceville High School and went on to study at the University of Florida where he earned a B.S. degree in Animal Husbandry. In the late 50s he attended Architect Design School in Chicago, then returned home in 1960, after the passing of his father, to begin his life-long career in agriculture. Along with his passion for the land, was his devotion and service to his church, his town and his family. He dedicated many hours to helping improve these institutions. In Graceville, he was a City Commissioner and Mayor, as well as being named Lion of the Year with many years of dedication to the local organization. He served as a member of the Holmes Creek Soil Conservation Board, a board member of the Northwest Florida Water Management District, Trustee of the Bank of Jackson County, board member of Campbellton-Graceville Hospital and served on special committees appointed by the Governor. He was a founding member of the Florida Peanut Producers Association, where he served as Secretary-Treasurer in the late 70s and President from 1982 to 1988. He was an active member of the First United Methodist Church and served in many capacities such as Chairman of the Board, Finance Committee, Missions, and Sunday School teacher. He was also active on the building committee, grounds beautification and the historical committee. He was preceded in death by his parents, his sisters Patricia Price Watson and Ann Price Merritt; his in-laws, Fred & Ruth McIntosh; a brother in-law John Watson, Jr; and a nephew Andy Merritt. Survivors include: his loving wife of over 50 years - Joe Ann McIntosh Price; sons William (Bill) Price, Graceville, FL, Scott Price, Ft. Lauderdale, FL; daughters Janie Flack and husband Chris Flack, St. Petersburg, FL, Joanna Price, Tallahassee, FL; four grandchildren Hunter Flack, Julianna Flack, Alex Price and Jai Price; numerous nephews and a niece; and two devoted four legged grand dogs, Bella and Bailey.

Mr. Robert Lee (Bob) Price, Jr. passed away on Tuesday, February 6, 2018 at Wesley Place in Dothan, Alabama. A celebration of his life will be held at 11 am CST on Friday, February 9, 2018, at the First United Methodist Church of Graceville,... View Obituary & Service Information

The family of Robert Lee Price, Jr. created this Life Tributes page to make it easy to share your memories.