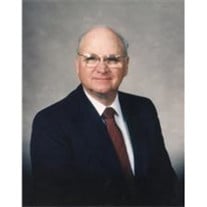 Sidney Buford Polston, of Graceville, passed away Sunday, December 18, 2011 in Tallahassee, after an extended illness. He was 83. Funeral services will be held at 11:00 a.m. Wednesday, December 21, 2011 at Damascus Baptist Church, Graceville, with Rev. Jimmy Legg and Rev. Chester Padgett officiating. Burial will follow in Marvin Chapel Cemetery with James & Lipford Funeral Home in Graceville directing. The family will receive friends at the funeral home Tuesday, from 5:00 to 7:00 pm. In lieu of flowers, memorials may be made to Damascus Baptist Church Fellowship Hall Fund, 5083 Hwy. 77, Graceville, FL 32440. Mr. Polston was born on October 2, 1928, to the late Ed and Tearsie Polston, in Coffee Springs, AL. He grew up on the family farm in Holmes County, FL and attended Popular Springs High School. In 1948, he began a 50 year career in the peanut industry, joining Greenwood Products Co. in Graceville, just as they were constructing the world's largest shelling plant. Mr. Polston became Plant Superintendent at an early age and remained in that position as the plant complex grew and was later purchased by Gold Kist, then Golden Peanut Co. After the Graceville plant closed in the early 90's, he commuted to Golden Peanut's Headland, AL plant, where he served in the same role until his retirement in 1998. During his 50 years in the peanut industry, he cherished the relationships he built with fellow employees, equipment vendors, and farmers. He was also a farmer and rancher. Upon his retirement from Golden Peanut, he remained active in raising cattle on his beloved Springhill Farms. Mr. Polston was a faithful member of Damascus Baptist Church, where he served as Deacon for over 50 years, was an active member of the choir, and taught many Sunday School and Training Union classes through the years. He was predeceased by his wife of 60 years, Hawtence Toole Polston, and brothers Olon Polston and O.S. "Sam" Polston. Survivors include sons, Lamar (Leslie) Polston of Graceville, FL, Justice Ricky (Deborah) Polston of Tallahassee, FL; god-child Chasney Dorsey Cripes of Graceville; 17 grandchildren and 5 great grandchildren; brothers Wilmer (Juanita) Polston of Columbus, GA, Clarence (Rose) Polston of Sebring, FL, and Wesley (Joy) Polston of Cottondale, FL, and numerous nieces and nephews. Serving as pallbearers will be the Deacons of Damascus Baptist Church.

Sidney Buford Polston, of Graceville, passed away Sunday, December 18, 2011 in Tallahassee, after an extended illness. He was 83. Funeral services will be held at 11:00 a.m. Wednesday, December 21, 2011 at Damascus Baptist Church, Graceville,... View Obituary & Service Information

The family of Sidney Polston created this Life Tributes page to make it easy to share your memories.